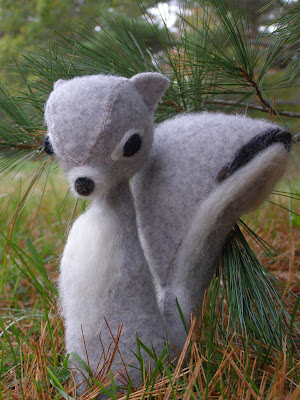 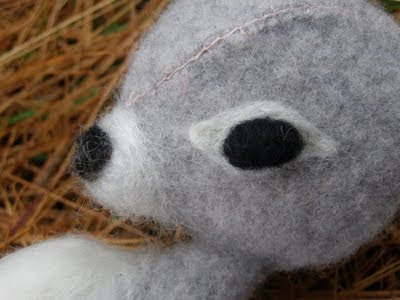 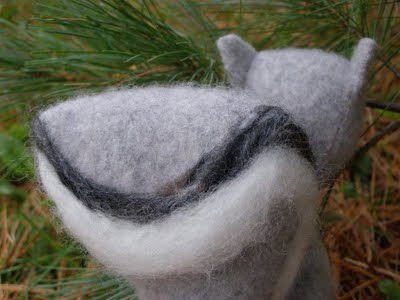 Here's a little grey squirrel I did for my buddy Ryan who moved out west. I've been trying to get cracking on all my Christmas custom orders. Perhaps I should have started a few months ago. 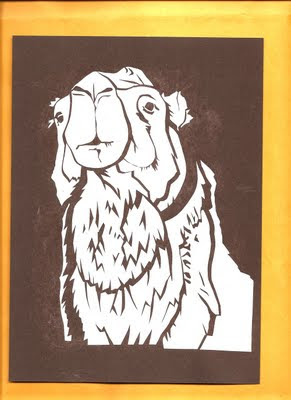 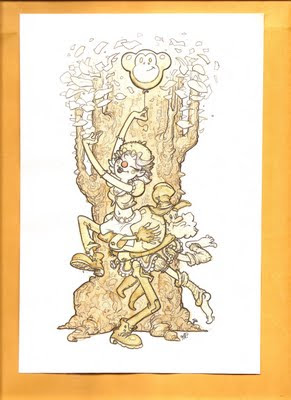 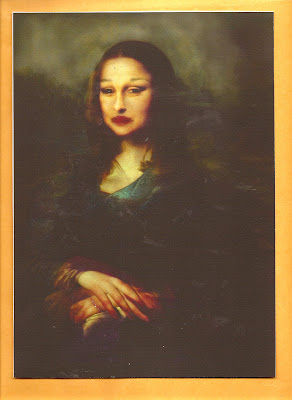 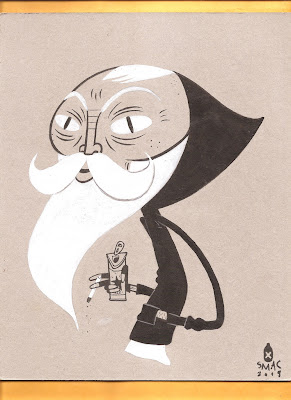 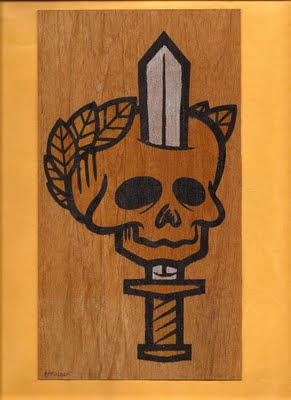 Back in the spring I had an idea to start a collaborative book that would travel around , from Artist to Artist, several times. Initially we would each have a week with the book until we mailed it off to the next participant. Well, unfortunately, when it came time for my second turn the book arrived just a few days before I moved to the country. Soooo.... the book got packed.
Moving was quite an ordeal for me. I left my cozy three bedrooms in the city and all my worldly possessions got crammed into 's garage. It's taken me some time to sort through all my boxes, unpacking my art supplies first and then finally after nearly 6 weeks I found the box with the precious book in it.

So sheepishly I have added my second contribution to the package and sent the book back on its journey. I'm sure the others have forgotten about the project by now.

Here is the first round of art contributed by myself, Justin Nieuwland, Julie Chiasson, Scott MacDonald and Dan Springer. 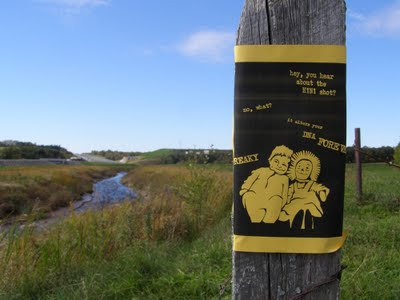 On our way to Thanksgiving dinner in Port Williams we made a few stops so I could get my postering fix in.

First stop as usual was St. Croix, so I could get an update on the Highway 101 expansion. They are actually doing a lovely job. They have re-grassed the hill so you'd hardly know that there was a small grove there just a year or so ago.

Next we did a run through Windsor - where I swear over half the valley had gathered for the pumpkin regatta. Emma and I got impatient for 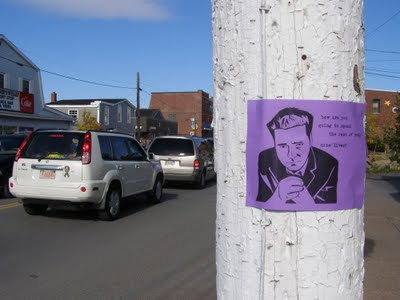 the race to start and ended up missing the whole thing while I rooted through sweaters at "In the Bin".

I managed to put up a few Jason Priestley posters before we got stuck in traffic as everyone moved on to their next fall themed event.

I had hoped to spy dear Jason in Wolfville as we went through. He starts filming his new series "Meet Phil Fitz" in the area next Monday... so I may have to do another trip next weekend.

Jason was my junior high TV crush. I 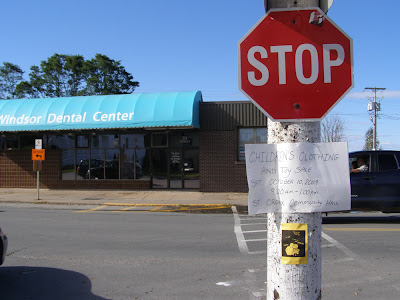 taped every episode of 90210. I even have a Brandon Barbie, which - when I worked at Collideascope, took a place of honour hanging above my head, arms stretched, where he protected me as my guardian angel (not my idea btw, but he did remain there till it was time to pack up the studio)

One of my final posters of the day went up in front of our old house in Port Williams. I loved that house, which ironically had Raggedy Anne wallpaper in my bedroom closet.
Even more ironically, shortly after I first met Bryan, I discovered he 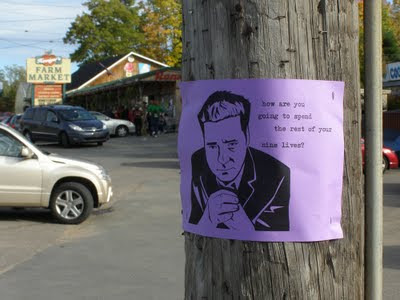 grew-up just the road from me. Who knew he'd actaully end up with the girl next door? Funny how fate works?

Now lets see what fate's plans are for Jason and I? 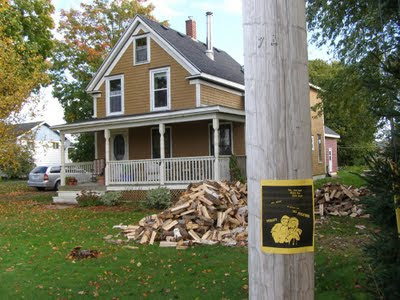 Posted by Tacha Reed at 1:47 PM No comments:

no vaccines for me thank you very much! 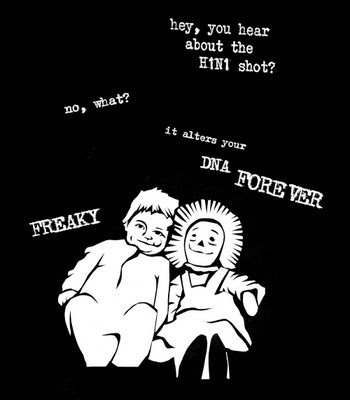 I have a long standing history of being very “anti-vaccinations” so it's really no surprise to me that my very first smile was inspired by dear old Raggedy Anne.

Over the years I have accumulated a small Raggedy Anne and Andy collection, as well as a strong stance against vaccines, which inject a virus directly into your blood stream as opposed to inhalation - the way humans normally contract viruses.

I can't tell you how justified I felt in my collection when I discovered that the creator of Raggedy Anne went on to use her and her partner as mascots for the anti vaccination movement. Following the death of his daughter, after receiving a mandatory small pox vaccine, Artist Johnny Gruelle became very vocal about his disbelief in the positive aspects of vaccines.

With this most recent, clearly man-made vaccine trying to impose itself on the world, I felt I had to do what ever I could to pass the word around just how unsafe and unnecessary this H1N1 vaccine actually is. I beg you all to do your research and decide for yourself if you really want to risk yourself with this avoidable evil.

A good place to start your search is with Dr Mercola at www.drmercola.com. He had a great “top 9 reasons not to get the H1N1 shot” earlier this week. For a more extreme, radical view check out David Icke, he’ll scare that pants off of anyone! http://www.redicecreations.com/radio/2009/09sep/RIR-090927.php 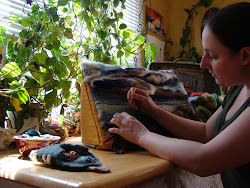 Fibre Art for the Young at Heart

Working in the arts has always been in the cards for me. After a childhood filled with time spent creating using what ever materials available, it was no surprise that by the age of seven I was firmly committed to living the life of an artist as I grew up.
After attending specialized art classes as a teen, I began my post secondary education studying photography and digital imaging, before shifting my focus towards graphic design, printmaking and film studies, eventually receiving a BFA from the Nova Scotia College of Art and Design in 2003.

Upon graduation I began teaching art to elementary students, and for nearly two decades I have continued to work as a freelance photographer and designer, collaborating with many musicians, entrepreneurs and not-for-profit organizations.

Since relocating to the tiny community of Ellershouse over a decade ago, my artistic practice has grown to include the creation of tactile fine artworks and products that make use of natural and recycled materials. These days I primarily create using wool from local British milking sheep raised in Avondale, which I carefully hand dye prior to transforming the fibre into vibrant felted wall hangings and functional items like hats and purses.

After taking on the role of facility manager for the Avon River Heritage Society Museum in 2013, the tidal river that surrounds the historic waterfront park became an ongoing source of inspiration for my artwork, especially evident in my 2019 felted series ADAPT, my graphic print Year of the Salmon, and the corresponding installation Ghost Salmon, which was placed along Simpson's Creek in Newport Landing in June of 2019.

When I'm not working or creating I continue to pass along my skills and knowledge by leading fibre art workshops and demonstrations, and by actively volunteering with groups like the Avon River Arts Society and the Full Circle Festival, organizing cultural events and activities.